In an interview, United Nations Secretary-General Ban Ki-moon discusses negotiations with Damascus, the international community’s paralysis on the issue of Syria and why he believes Germany must take on a stronger role in the worl

Ban Ki-moon, 69, has served as secretary general of the United Nations for the past seven years. His second term will end in December 2016. Under his leadership, he has sought to make the UN more powerful, but he must now instead fear that the civil war in Syria will become a bloodbath he is powerless to stop, reminiscent of the Rwandan conflict. The South Korean UN chief is often called “Mr. Invisible,” but he has recently had a highly visible public rolediplomat. After precisely 27 minutes, he stood up to leave for his next appointment

SPIEGEL: Mr. Secretary General, are you still in direct contact with Bashar Assad

Ban: I was at the beginning, but have not been for a long time now. But I did meet with Syrian Foreign Minister Walid Moallem the week before last in Montreux. We had a good meeting, but he was very difficult to convince

SPIEGEL: We noticed that. So do you believe it no longer makes sense to speak directly with Assad?

Ban: These are very difficult negotiations, but UN and the Arab League special envoy Lakhdar Brahimi is a skillful negotiator. The talks have not made much progress yet, but both parties have sat down at the table together. The talks are continuing and that is positive

SPIEGEL: Even as these talks take place, however, the regime continues to bomb rebel areas and to starve out civilians. Are you not worried that Assad is just trying to play for time, that he’s just playing games with you?

Ban: Of course there has always been concern that these are stalling tactics. That they talk even as they gain against the opposition fighting on the ground. That’s why we wanted to start with confidence-building measures. We have proposed a limited weapons cease-fire in areas like Homs and Aleppo. Unfortunately, even that isn’t working

SPIEGEL: The stated UN goal is a transitional government with full executive powers. How do you believe that is still even possible

Ban: The gap between the regime and the opposition is large, particularly on the issue of a transitional government. The important thing, though, is that both sides continue to sit down together and discuss these matters. And I believe this despite the fact that the Syrian government delegation is very unwilling to discuss details. We have to be patient

SPIEGEL: So you don’t want to exert pressure on Assad and his regime

Ban: Oh, it is always important to exert pressure. But when it comes to pressure, I would suggest that it be applied to both sides. And both sides must show more flexibility

SPIEGEL: The only reasonable result at the conference was the agreement by the regime to allow an aid convoy to enter into the Old Town in Homs, where thousands of civilians have been locked in for over a year. But even that hasn’t happened

Ban: The mistrust on both sides is high. Letting out all the civilians who have been besieged for many months would have been a good confidence building measure. I’m very disappointed that those efforts have so far been blocked. We will continue to push for this to happen

SPIEGEL: Could this refusal to allow aid deliveries convince Russia to no longer block sanctions against Syria in the UN Security Council

Ban: We have to be very practical and realistic. It is very unlikely at this time that Russia will agree to any Syrian sanction resolution. But I do hope to be able to discuss the Syria matter with the Russian foreign minister in the coming days

SPIEGEL: There can’t be a solution without Russia. And without Iran

Ban: It would have been better if the Iranians had taken part in the talks in Montreux. Iran is an influential regional actor, and it will play an important role in the implementation of an agreement between the government and the opposition. That is why I invited Iran. Regrettably, I had to rescind this invitation

SPIEGEL: Was the invite a mistake? After all, the Iranians are known opponents of an interim government without Assad

Ban: My invitation letter stated explicitly that our goal is that of a transitional government. However, the Iranians didn’t want to commit themselves to this goal

SPIEGEL: Your only real success until now has been getting Assad to get rid of his chemical weapons. But so far, only five percent of those weapons have been taken outside the country. It appears as though the regime in Damascus wants to stall the process

Ban: The Syrians are cooperative, but the removal needs to happen more quickly. Of course there are some security and logistical issues, but these cannot be allowed to lead to bigger delays

SPIEGEL: So Damascus is indeed blocking the removal?

Ban: Foreign Minister Moallem has promised full cooperation and that he will personally ensure quick removal. We are now speaking with the Russians in the expectation that they can help expedite the process

SPIEGEL: Is it still even possible that all the country’s chemical weapons can be removed by June 30

Ban: That is the deadline, and although it is admittedly a very tight one, it does not mean that it cannot be met. The material has to be removed from Syria by June 30

SPIEGEL: And if Assad is still in possession of poison gas after that, will there then be the threat of sanctions

Ban: It is still too early to talk about that. We first need to see if the deadline can be met or not — either because the Syrian government is delaying or because of the uncontrollable situation in the country. It is only then that we can begin discussing the future course of action

SPIEGEL: How did you react when you saw the photos of around 11,000 dead from Assad’s torture prisons?

Ban: If confirmed, it is really horrible, unacceptable.

SPIEGEL: You have doubts about their authenticity?

Ban: We are waiting for the assessment of the Commission of Inquiry that has been commissioned by the UN Human Rights Council. Its report will come out at the end of February.

SPIEGEL: Do you want to call on the International Criminal Court to investigate Assad for possible war crimes?

Ban: Syria never signed the statutes creating the court, so the Security Council would have to transfer the case to The Hague — and I can’t imagine at the moment that Russia would support that. Still, it is important that the perpetrators do not go unpunished.

SPIEGEL: Could hundreds of thousands of deaths and millions of refugees have been avoided if the international community had intervened early enough, by delivering weapons to the opposition or creating a no-fly zone? 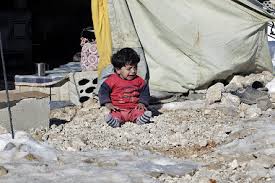 Ban: The international community is divided. This is why there’s still no resolution for the conflict. The Syrians are divided. And the Security Council is not united. And some of the main actors in the region aren’t either. That’s why my message has always been consistent that there is no military option. I have been urging those countries that have been providing arms to stop, so that a political solution can finally be found.

SPIEGEL: At the very beginning, at least, there was a military option. The UN supported Libya, Iraq and Afghanistan with military missions. Why not in Syria?

Ban: Of course there should be a mandate to protect the civilian population. But we don’t have the agreement of the Security Council for that. And that kind of mandate can only be approved by the Security Council. Because the distrust is so deeply rooted between the conflict parties, we are only able to provide limited humanitarian assistance. Our humanitarian convoys can’t always reach the occupied areas. We tend to be somewhat helpless, despite the fact that we do everything we can to help the people. But it still isn’t enough.

SPIEGEL: Could you imagine sending peacekeeping forces to Syria?

Ban: At the moment there is no peace to keep. But once a political solution has been found and the hostilities have stopped, we can then send in a peacekeeping mission. This could, of course, only happen with the Security Council’s approval.

SPIEGEL: Is the international community more inclined to come to an agreement over intervention in Africa — in the Central African Republic, for example?

Ban: We support the African Union-led mission, but it unfortunately has not been able to stabilize the Central African Republic. Lawlessness still prevails and there are massacres and killings. That’s why I welcome the engagement of the French and the European Union. I have also asked German Chancellor Merkel and Foreign Minister Frank-Walter Steinmeier for strong and energetic support.

SPIEGEL: How did the two react?

Ban: You would have to ask them, but they are both energetic.

SPIEGEL: The majority of the German people have reservations about assuming greater responsibility in the world. Is that kind of thinking up to date?

Ban: I highly welcome the debate. That is normal. Germany is one of the countries that provide the United Nations with strong financial and political support. We value Germany as an active representative of human rights. So it is fully understandable that we expect a German contribution.

SPIEGEL: Do you think in cases of doubt that Germany should engage itself more in military terms?

Ban: I know there is currently a national debate taking place about Germany’s role in the world. You provided support during the deployments in Afghanistan and Mali as well as the Navy mission off the Lebanese coast. Those are some important contributions. As the secretary-general of the United Nations, I would hope that all member states that are able to do so will contribute to stabilizing the situation in conflict regions like the Central African Republic before they become uncontrollable. The international community should take decisive action in the Central African Republic. I have said this to the chancellor and asked her to do everything possible: financial, logistical — or even by providing troops. But what this actually precisely entails is a sovereign decision to be made by the German government.