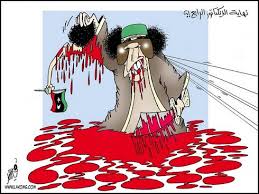 What happens when you are an autonomous entity who happens to be in the middle of prime infrastructure and oil deals? What if there were no checks and balances or a system that ensures public funds land where they should? What if you were given unlimited political authority with no elected bodies to report to? This would make you a dictator. You could choose to be a benevolent dictator or a selfish one. Most dictators, past and present, chose the latter
Muammar Gaddafi
When the assets of former Libyan leader Muammar Gaddafi and his kin were frozen in March 2011, some of the numbers that came out were astonishing. The U.S. had seized $30 billion of the family’s investments. Canada had frozen $2.4 billion, Austria had frozen $1.7 billion and the U.K. had frozen $1 billion. It was reported that these figures were nowhere close to the actuals. Over his 42-year reign, Gaddafi was said to have amassed $75 to $80 billion
Bashar al-Assad
A former ophthalmology student, Syrian President Bashar al-Assad made sure key relatives were put in prime government positions. The Guardian reports that Assad’s realizable assets stand at $1.5 billion. If this figure includes assets within Syria, which Assad and his family control, the figure would be much larger at about $122 billion. His wealth is said to come from land, energy and licenses. Assad is known to hold his cards, money and positions tightly within his inner circle
Hosni Mubarak
A military head for over 30 years, former Egyptian President Hosni Mubarak amassed wealth while his citizens continued to struggle on a daily basis. The 82-year-old dictator was said to have amassed $70 billion over 30 years, with his sons and family controlling and taking cuts on all projects that took place in Egypt. The Mubaraks lived life regally, jetting around the world and living in palaces
Ali Abdullah Saleh
Former Yemeni President Ali Abdullah Saleh ruled over the country for 30 years until he recently ceded power on his own terms. He is said to be worth around $32 billion
Zine al Abidine Ben Ali
Former Tunisian President Zine al Abidine Ben Ali was sentenced to 35 years in prison in absentia. Overthrown by the Jasmine revolution, he lived an excessive life while his countrymen struggled under human rights atrocities. His wife is said to have made her exit with gold bars worth $37 million. Ben Ali is said to have a net worth of $7 billion
Robert Mugabe
Zimbabwean President Robert Mugabe has turned once-rich Zimbabwe into his personal playground, killing most of his rivals and looting Zimbabwe for good measure. His net worth stands at $5 to $10 billion thanks to his country’s diamond deposits
Teodoro Obiang Nguema Mbasogo
Equatoguinean President Teodoro Obiang Nguema Mbasogo has looted and plundered his oil-rich country, sharing none of the country’s wealth with the citizens. He is said to be worth over $1 billion, while his country’s citizens live on less than $1 per day. Meanwhile, his son continues his legacy of a lavish lifestyle which includes a $35-million estate in Malibu and three $1.7-million Bugatti Veyrons
Ali Bongo Ondimba
Gabonese President Ali Bongo Ondimba is said to have, along with his associates, pocketed 25% of Gabon’s gross domestic product (GDP). He is said to be worth over $1 billion, though this number seems conservative. In 2010, he is said to have bought a townhouse in Paris for $138 million
The Bottom Line
Most of these dictators had a share in every pie, spent a lot of time covering up money trails and amassed fortunes for their family members. Others brokered deals that would prevent them from ever being prosecuted. Some of these rulers quietly handed the reins to self-appointed successors or guerrilla fighters. The net worth of some of these dictators would easily put royalty to shame