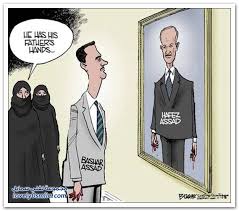 Lest we forget, or forget why, it has become important to consult the basics regarding the Syrian uprising. This might very well be the best time for such a review. For as the death toll rises and the gradual destruction of the social fabric continues, the Syrian tragedy is increasingly more about the fall of Syria(ns) than the fall of the Syrian regime. One result has been analytical helplessness, which prompts a return to the basics

Those of us who follow Syria coverage in every major outlet in both Arabic and English know well that we are getting into diminishing returns. Worse, the political polarization around Syria has produced an interestingly problematic phenomenon: analysis is no longer important. You can always rely on the gatekeepers and die-hard supporters on either side to stand by you so long as you are politically on their side. Your analysis matters less/not. Only your position does, even if under changing circumstances. It is all ex post facto at this point, as both camps have solidified into two concrete walls, crushing both nuance and humanity

In such political fog—and I make no pretense of saying that it is an insignificant political fog—it might be a good idea to review some of the basic realities, causes, and contours surrounding the Syrian case. Every word in this and any other article will be hotly contested, but not all contestations—nor all my claims—will stand the test of time

I will briefly review the complexity of the Syrian uprising and then address what can be called the “stubborn facts” in condensed form. I end by discussing the structural causes of the uprising and the thorny issue of “sectarianism

[I will try to address these points in a less prose-ish form, anticipating a more detailed formulation in the future. The points below have been made by many, including myself, at the various venues in which Syria was the topic. Apologies for the elementary nature of some of the claims, but that is perhaps what is also needed during the current fog and tragedy.]

1. The Evident Complexity of the Syrian Case

All the other Arab uprisings are complex, but the Syrian case is endowed with added complexity because it is at the heart of various historical struggles in the region and beyond: the Arab-Israeli conflict; the related question of resistance to imperialism; regional rivalry between Saudi Arabia and Qatar on the one hand and Iran on the other, with Syria squarely in the latter camp since the uprising; a cold but real tension between the United States and Russia; and, finally, the question of Hizbullah, which merits its own category. Increasing regional sectarian tensions also add another ugly layer. Thus, the Syrian uprising is at once a local, regional, and international affair. Adding to the complexity is the fact that the majority of forces who wish to remove the Syrian regime from power, or those who historically opposed it, are themselves the dominant political/economic forces regionally and, to a large extent, internationally (i.e., the United States, Saudi Arabia, Qatar, and Israel, among others). This is to be contrasted with the uprisings in Tunisia, Egypt, Bahrain, and Yemen, which were largely domestic affairs and excluded the support for regime change by the aforementioned dominant forces (and in the case of Bahrain, included these forces’ intervention to preserve autocracy). Such differentials explain, in part, why many historical critics of the Syrian regime’s domestic policies continue to hold this stance but not from the perspective of—nor in accordance with—the interests of the forces listed above. The protracted nature of the Syrian uprising and the lack of an evident exit or solution is a direct function of the intertwining of its local, regional, and international dimensions

Since the summer of 2011, we have been in a situation in which we are no longer comparing good and bad alternatives. We are facing a choice between the horrible and the catastrophic, at least in the short to medium run. To seek the optimal outcome is to be unrealistic or uninformed. Discursively, the nature of the divide that makes up the complexity is thick and varied, but has been dominated by the authoritarian/imperial contest (i.e., what is worse, authoritarianism or imperialism?

Some of us have critiqued this binary by saying we are against both, but we were in turn critiqued because that position was no longer real, as there was no local agency that espoused it. Yet there are no metrics to determine whether the binary positions that pit regime (or status quo) supporters against supporters of the now multi-faceted uprising is any better. Ultimately, it could very well be a matter of horizons in time and space. In other words, how far is one’s gaze and regarding what issues?

Three elementary, interrelated, and stubborn facts animate the uprising and cannot be oversimplified or ignored, whatever one’s politics. Their discursive and empirical relevance to the ongoing conflict cannot be underestimated, and will likely animate how history books will distill the thick lines in retrospect

First, in analyzing the situation in Syria today, and despite the unsavory actors lined up against the Syrian regime, we cannot consider March 2011 to be the starting point of the unfolding events. We are witnessing an opposition to decades of dictatorship in Syria, irrespective of the twists, turns, and marring of the uprising. This fact cannot be compromised or limited in space and time to the nitpicking about who did what since March 2011. In other words, the sins of the Syrian regime—primarily against the majority of Syrians—must take the lead in animating one’s understanding of the developments on the ground: in March 2011, only the regime was standing, unrivaled. This is a thick and sometimes uncomfortable file for those who are ambivalent about the uprising. Yet it is not likely to be written off, nor should it. When people argue or write about Syria, even proponents of the opposition, they tend to overvalue the post-March 2011 period at the expense of the past few decades. Analytically, to discount the pre-March 2011 period is to fail to understand why after March 2011 the Syrian regime has lost its ability to govern Syria, whatever one’s political/ideological leanings. And many of those who support(ed) the status quo (e.g., minorities) have/had their reasons, the most important of which had nothing to do with the regime’s character. Instead, it is about protection, survival, and now instinct as a function of aligned strategic interests. This is in part why many observers fail to make good sense of the distribution of views and positions on Syria

The second stubborn fact is that, for some time now, we can no longer take this uprising for granted (some say this is a gross understatement, and it may well be). We are no longer witnessing a clear-cut event where an independent pro-democracy movement is facing a dictatorship. Though the latter part holds, the former does not. The dependence, weakness, fragmentation, and divisiveness of the especially external opposition and its internal correlates are now evident to all. Beginning sometime during the summer of 2011, this conflict has become a war of position in which the opposition’s moral high ground has diminished considerably as a result of some of its own tactics and a good deal of its external relations and related factors. In other words, we passed the point where the opposition can depend on the mere fact that it is opposing a dictatorship. Those who still write about the Syrian uprising—and they are many—as though the first days of the uprising were frozen in time are speaking of a world that no longer exists. Reasonable observers and participants can disagree on the extent to which many parts of the opposition have been tainted by the same tactics/behaviors that characterize the regime, but it is difficult to dismiss the fact that the fight has been, in part though not in whole, hijacked by exogenous factors, actors, and sentiments for purposes that do not serve the interests and aspirations of the majority of Syrians. Still, that does not mean that a return to the status-quo ante should be acceptable. But the binary that increasingly imposes itself today (i.e., the regime or the externally supported uprising) is in practice difficult to dismiss in favor of good sense, though it must be overcome

The third stubborn fact is that external supporters of regime change in Syria were perhaps one of the biggest impediments to a genuine movement toward a better future there because of their brutal policies, duplicitous politics, and/or human rights record. These external actors include Saudi Arabia, Qatar, Israel, and the United States. Ironically, Israel fits in this group by association, though its ambivalence until recently regarding regime change in Syria kept it on the sidelines. (The ambivalence is caused more by a desire for a “strong” regime that can protect its northern border, as the current regime has done for nearly four decades.) Significantly, all these states constitute the spearhead of counter-revolution in the region. This third stubborn fact is what buttresses the binary discussed above and creates despair among those inside and outside Syria who are satisfied by neither

[Some may retort: “What about Syria’s supporters, Russia, China, or Iran, not being democratic and having their own brutal/repressive records?” Certainly. But these countries are not seeking to change this regime, and whoever argued that the Syrian regime is democratic or is seeking democracy for this association with non-democratic states to even be relevant? Furthermore, democracy is only one factor in this conflict. There are more visceral/existential issues related to the region as a whole that have animated the dominant conflicts since World War II (e.g., the Arab-Israeli conflict and Israel’s consolidation of Apartheid-type rule with ample backing, and the hegemony of various mutations of neoliberal economics, which fermented difference, exploitation, and instability across the board

With these stubborn facts established, I will move on in Part 2 to discuss the causes of the revolt, putative and actual, and to the question of sectarianism