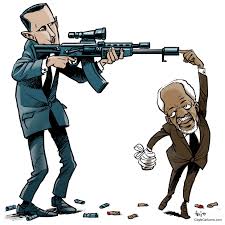 Neocons to the Front

Last Friday (9/28), neocon military historian and columnist Max Boot teamed up with one-time academic and Bush administration defense official Michael Doran to publish an op-ed in the New York Times “Five Reasons to Intervene in Syria Now.” Boot has made a career of being grievously wrong about important matters, most notably the US invasion of Iraq in 2003. Doran, now a senior fellow at Brookings’ Saban Center (funded by the man responsible for loosing the “Mighty Morphin Power Rangers” on a generation of American children), is a bit trickier. Once Elliott Abrams’ replacement on George W. Bush’s National Security Council, he’s the rare right-wing Middle East expert who believes Israeli colonization of Palestine a bad thing

Doran and Boot open with an endorsement of what they call the “Obama Doctrine” (it’s likely news to the President that he has one)—“a coherent approach to the use of US power”: “getting into a conflict zone and getting out fast without ground wars or extended military occupations.” They point to Libya as Exhibit A (without mentioning Obama’s failure to invoke the War Powers Act, the uninvestigated civilian casualties of NATO bombing, or any of the, ahem, messy aftermath)

They then take the President to task for failing to apply his own Doctrine in Syria, “where it would benefit the United States the most.” They admit “Syria is a mess” but believe regime change the cure nonetheless. Their five reasons are telling

First, knocking off al-Assad would shrink Iranian “influence in the Arab world.” What influence? The Gulf Arabs loath the mullahs. North Africans could care less what Ahmadinejad does. Hamas leader Khaled Meshal left the relative safety of exile in Damascus and denounced the regime. Apart from some elements of the al-Maliki government in Baghdad, and the Hezbollah movement in southern Lebanon, Arabs have little time for Tehran

It’s the Hezbollah connection, of course, that’s Doran and Boot’s real target here. It’s always about “Israel” for the neocons. By “Israel,” neocons mean wing nuts like Netanyahu, rather than Peace Now activists or the 20% of Israelis who double as Arabs. Without the use of Syria as a conduit for Iranian arms transfers to Lebanon, Hezbollah will find resupply difficult during its next defense against Israeli aggression

Second, throwing gasoline on Syria’s fires will “keep the conflict from spreading.” They point to spinoff sectarian dustups in Lebanon and Iraq, and Turkish accusations that Assad is supporting Kurdish guerillas in Turkey “in order to inflame tensions between Kurds and Turkey

As if Kurdish Turks needed Syrian assistance to feel tense about Ankara. Bashar’s father provided radical Kurds refuge and support during the early eighties, and Bashar himself turned over control of some Kurdish-Syrian villages to Kurdish militants last summer—leading to renewed conflict—in retaliation for Turkish support of his opponents, but Kurds rebelled against the Ottoman Empire over two hundred years ago. The establishment of the modern Turkish state (virulently anti-Kurdish) led to Kurdish rebellions in 1920, 1925, 1930, and 1938. The current insurgency began in 1984 following the 1980 military coup and crackdown on all of Turkish civil society.  A long and bitter struggle ensued, with the Turkish government waging a cruel counter-insurgency campaign during the nineties leading to tens of thousands of deaths, over 3000 villages forcibly evacuated or destroyed, and two million refugees. Ironically, the safest havens contemporary Kurdish militants have found have been in Iraq following the Gulf War and the neocon-endorsed and engineered regime change of 2003

US or other intervention in the Syrian civil war is far more likely to lead to the spread rather than containment of the conflict, including in Iraq and Lebanon. Look at Doran and Boot’s example of Libya. Gaddafi’s fall led directly to the Tuareg rebellion in Mali, further complicated now by the role played by Islamists, some allied with al-Qaeda, and the military coup in Bamako. But when did a neocon ever care for a place without oil or resistance to Israel

Third, Doran and Boot argue the US should “train and equip reliable partners within Syria’s internal opposition.” This will lead, they contend, to “a bulwark against extremist groups like al-Qaeda which are present and seeking safe havens in ungoverned corners of Syria.” Sound familiar? The neocons are desperately seeking a Syrian Ahmed Chalabi. Just as in Iraq, al-Qaeda was nowhere to be found prior to the onset of the conflict. The recent arrival of suicide bombings in Damascus has neocons double down. “Train and equip”? “Reliable partners”? As in Afghanistan? “Reliable” for what? Who might these people be? Will the neocons get to vet them

Fourth, dumping Assad “could improve relations with key allies like Turkey and Qatar.” Turkish and Qatari officials complain that the US provides the Syrian opposition nary the bullet or gun to fire it but mere nonlethal assistance. If it were up to Turkish and Qatari leaders, so say Doran and Boot, the US would establish a no-fly-zone and “safe zones” for internal Syrian refugees. ‘Better relations with Qatar now!’ reads the neocon rallying cry. The Turks have a half million men under arms. Their Air Force includes F-16s, drones, mid-air refuelers and AWACs craft (parts of a fleet larger than that of Germany, France or Italy). Doran and Boot should send a version of their op-ed to an Ankara or Istanbul paper calling for Turkish leadership of the mission. Chances are the Erdogan government is not interested in attacking a neighbor with which it is not at war

Fifth, Doran and Boot remember the horrors inflicted on Syrians by Assad’s agents.  They remind President Obama of his recent promise “to foresee, prevent and respond to genocide and mass atrocities.” They propose “putting allies in the lead” while avoiding the “slippery slope toward a ground war.” You believed neocons had learned nothing from Afghanistan or Iraq. But they have: their enthusiasm for drone strikes in Pakistan and Yemen, and air attacks on Iran and Syria is evidence. Screw boots on the ground, we’ll whack ‘em from afar

The neocon case for intervention in Syria concludes with some analysis and a plan. They list “our closest friends in the region”—Saudi Arabia, Turkey, Jordan, Qatar and Israel—plus the EuroImperial Duo of Britain and France as champing at the bit to begin the bombing. Doran and Boot place no store by UN action nor believe the Free Syrian Army capable of toppling Assad—“it is not a cohesive organization.” Instead, “America must identify those forces on the ground that are the most effective, easily supplied and amenable to help

Their recommendation is for the US and its local friends to violate the UN Charter and other international law by attacking a United Nations member without Security Council permission. Doran and Boot’s enthusiasm for Operation Unified Protector in Libya does not extend to a Security Council Resolution to legally enable similar action in Syria. This is for the practical reason that neither Russia nor China share their enthusiasm. Much of the Chinese and Russian reticence may be explained by their reasonable assessment that NATO & Co. exceeded its UN mandate in Libya. The Security Council’s “responsibility to protect” in Libya did not include, argue Moscow and Beijing, acting as the Libyan rebels’ air force for offensive action against Gaddafi’s military. R2P does not include regime change

Doran and Boot’s suggestion to avoid the Free Syrian Army but find someone on the ground to supply with guns and bombs is typical neocon loopiness. Courageous Syrians have demonstrated against and fought Assad for a year and a half. If the CIA and other “special operators” have yet to identify a “cohesive organization” that meets Doran and Boot’s loose criteria for lethal aid, what makes them think it’s any more likely now? Osama bin Laden was once “amenable to help” from the United States

Doran and Boot are, like their fellow neoconservatives, unable to resist the temptation to play strategist and field commander. Their plan would have the US and Turkey combine to create a corridor for humanitarian aid and military materiel from Aleppo (which they mistakenly identify as Syria’s second largest city; it’s the most populous) to the nearby Turkish border. Following the liberation of Aleppo, the US should cooperate with Jordan to open a second corridor between Damascus and Dara’a to “serve as the southern base of the insurgency

Successful corridor construction, Doran and Boot tell us, depends on the creation of a “countrywide no-fly-zone.” Assad’s air force must be grounded, and his air defenses suppressed. This would happen “quickly” and with “little risk,” but only if the US led the effort, just like in Libya. They’d leave maintenance of the no-fly-zone to US partners. Neoconservative enthusiasm for intervention, perhaps somewhat dimmed by years of death, destruction, and failure in Afghanistan and Iraq, was reinvigorated by the fall of Gaddafi. The authors have probably already ordered the printing of the “Mission Accomplished” banner

As annoying if not as reckless as the substantive weakness of Doran and Boot’s piece is its sneering tone. They move from faint praise for the “Obama Doctrine” at the outset of their essay to the sarcastic endorsement of “a ‘lead from behind’ approach . . . in Syria.” Lead from behind” was the favorite phrase used by Condoleeza Rice and others at the Republican National Convention to characterize Obama’s foreign policy. Since 2002 or so, it’s been increasingly difficult to know how seriously to take neocon arguments. Do they actually believe them themselves? It never ceases to surprise that the neocons retain any authority whatsoever, let alone appear on the op-ed page of the New York Times. Neoconservatives were dead wrong about Iraq. They are genuinely dangerous on Iran. They must not be heeded on Syria

3 comments for “Five Reasons Not to Intervene in Syria”